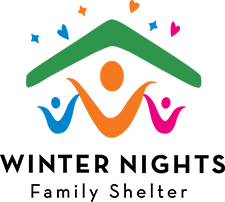 Winter Nights Family Shelter begins as a program of the Interfaith Council of Contra Costa County (ICCCC). The attempt by the Social Justice Alliance of ICCCC, to rent space at the Concord armory, and then the unoccupied library building in Orinda, fails due to NIMBY (Not in my backyard) resistance from local residents.

Year 1  (2004-2005)
Over the course of the next ten months, Gwen Watson, Natalie Russell, and Dorothy Vance work tirelessly with the city council, community groups and faith organizations and so that they might better understand Winter Nights Program. These three women are instrumental to our success. The shelter opens in partnership with faith congregations, who offer their facilities for one week at a time in October 2004 until April 2005.

Year 2 (2005-2006)
The Oasis Day Center is established at the St. Vincent de Paul Society in their Pittsburg facility. It is a daytime “Oasis” for parents and children who have nowhere to go during the day.

Year 3 (2006-2007)
The program gathers support. More and more congregations want to host shelter and provide food. Priority is given to those with the resources to provide two -weeks of shelter and amenities. A used van is purchased to transport children to the schools from which they became homeless.

Year 4 (2007-2008)
The season’s schedule achieves the goal of two-week stays per host congregation site. Retired social worker, Joe Malcaluso joins the team and works with families to set goals. Joe is adamant about not “enabling families”, a principle that Winter Nights upholds to this day.

Year 5 (2008-2009)
A formal tutoring program led by Judy Stillman begins with a team of Traveling Tutors who work in pairs on the same night every week for the duration of the season.

Year 6 (2009-2010)
The impact of the financial crisis is felt. Winter Nights is over capacity with thirty-four clients. The van is full of school children every day.

Year 7 (2010-2011)
Traveling Tutor, Jim Pfohl suggests that tents would give families more privacy. The tents are purchased and remain a popular feature of the program today.

Year 8 (2011-2012)
A small portable library is created. Several laptops are purchased to allow access to online assignments and Khan Academy. A high-school aged guest goes on to graduate with a scholarship to Cal State Monterey.

Year 9 (2012 – 2013)
Traveling tutors develop a communication system to keep a running account of each child’s progress. Congregation newsletters and local newsletter continue to spread the word about Winter Nights and the impact of their work.

Year 10 (2013-2014)
The goal of the program is to help families become self-sufficient. One of the things each family needs is access to transportation. Three cars are donated to Winter Nights in the tenth year and given to three families.

Year 12 (2015-2016)
Housing that is affordable is almost impossible to find. The Shelter evolves from an emergency shelter into a transitional shelter with services other than finding housing becoming more critical to the group served.

Year 13 (2016-2017)
An executive team is formed. With the programs growing budget comes the need for regular planning and communication of goals and plans for the future

Year 14 (2017-2018)
A new 14-person van is purchased and continues to take children to school and parents and toddlers to St. Vincent de Paul. The Parking Lot Program opens in a church parking lot in East Contra County. It offers a safe parking lot for homeless families living in their cars. Snacks and a light breakfast are offered.

Year 15 (2018-2019)
The first “Alumni Dinner” gave our current clients a chance to hear first-hand how the program helped transform their families and help them into sustainable housing. The shelter establishes itself as an independent 501(c)(3) nonprofit organization. The COVID-19 pandemic required us to adapt our operating model, but we were able to complete the season without any client or staff becoming infected.

Back to About Page